You Bought It. You Break It. They’ll Fix It.

The Fixers’ Collective wants to help you repair your broken stuff 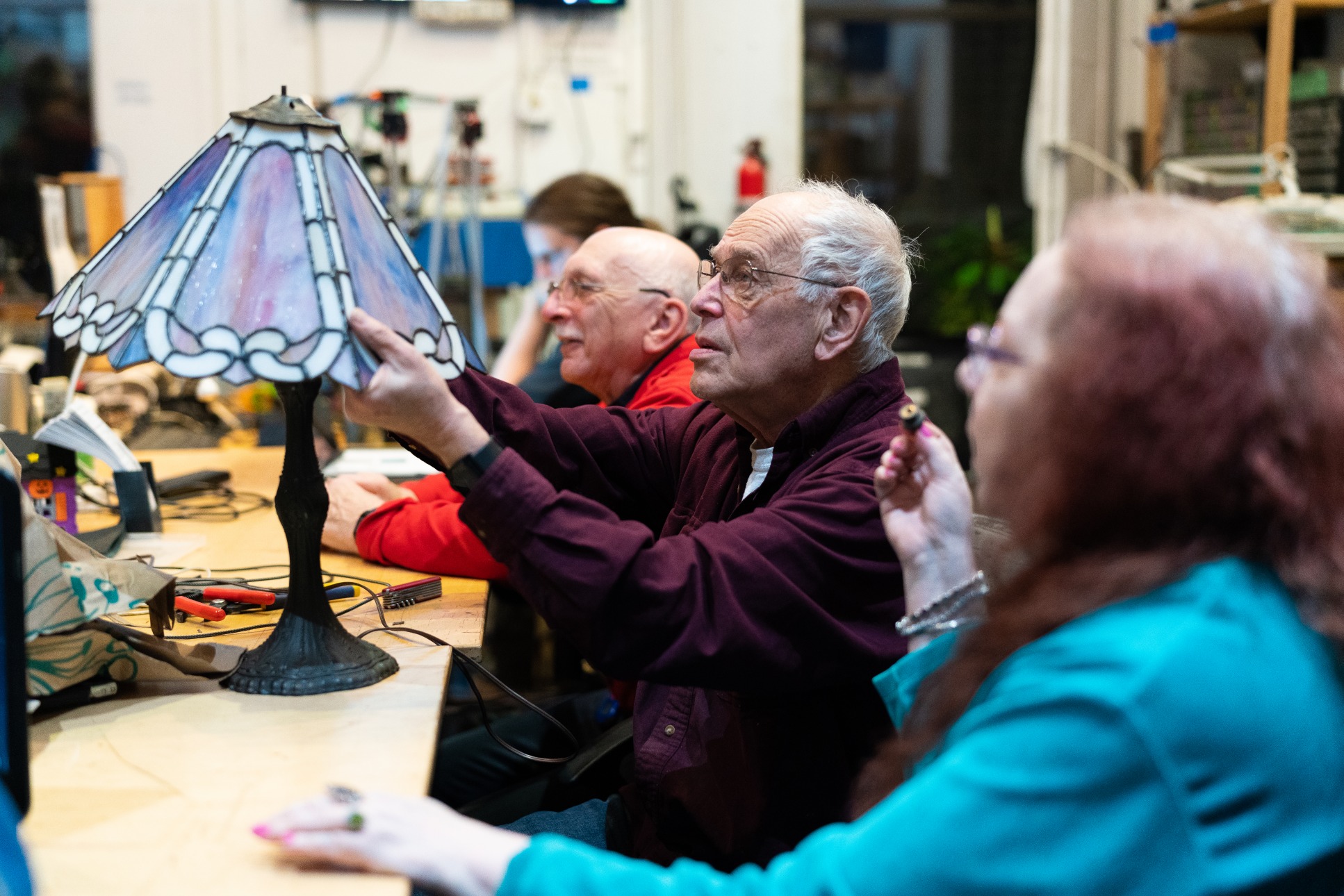 Sheela Lambert’s pink, stained-glass lamp has been broken for weeks. She could just toss the lamp, but it was handmade by a local artist and Lambert, 63, has grown attached to it. Living on disability income left her with little cushion to buy a new one, so Lambert was living in the dark in her Washington Heights apartment.

And then she read an article about the Fixers’ Collective.

“This is super cool,” said Lambert. “You’re saving stuff from going in the garbage and the landfill.”

The Fixers’ Collective is a small group of New Yorkers who repair broken items, rather than tossing them to the curb. With New York City aiming for zero waste by 2030, this group is doing its part contributing to these efforts, and they have made a community out of doing so.

On a Wednesday evening, the group met at Hack Manhattan, a member-run, community tech space on West 14th Street. The second-floor workshop feels part garage and part art classroom. The floor-to-ceiling shelves are packed with labeled boxes, tools hang neatly from peg boards and the large table in the center is a mess of wires and power cords.

The collective started in 2008 as an art exhibition at Proteus Gowanus Gallery, focusing on the theme “mend.” The exhibition explored the skills and tools of repair and included a public fix-it workshop in the back of the gallery.

But when the exhibition ended in 2009, people hadn’t quite gotten their fix.

“People still wanted to meet on a regular basis to fix stuff, so that part of the exhibit kept going,” said Vincent Lai, 52, who has run the collective since 2010.

The group meets twice monthly—once in Manhattan and once in Brooklyn—and is open to the public. Their drop-in visitors hear about the meetups on social media or by word-of-mouth and show up wielding their wounded toasters, vacuums and lamps, once even a theremin, an electronic musical instrument.

The Fixers, as they refer to themselves, come with a variety of skill sets—mechanical engineers, information technology specialists, a sound man, even a retired rabbi. What brings them together is a love of tinkering.

For Lai, whose background is in IT, this interest started around the dot-com boom.

“There weren’t people who tinkered and fixed stuff,” said Lai. He started buying equipment that was a little blemished, fixing it and reselling it for a profit. His first project was a laptop with a broken screen.

Wynn Levy, 59, joined the collective several years ago when he saw a flyer.

“I have a mechanical engineering undergraduate degree so I’m kinda handy,” said Levy, smiling. “I showed up with some of my tools and I just started fixing stuff and I’ve been coming ever since.”

But for Levy, the draw goes beyond the joy of tinkering.

“I like to do fixing because it’s fun,” said Levy. “But I also like to make a little political statement to fight consumerism.” When something stops working, most people rush to replace it, rather than investing the time and effort into fixing it, said Levy.

Galicia Outes, 39, said she trekked from Brooklyn to Manhattan to get help repairing a string of lights she had sewn into a furry vest.

“No one repairs things any more,” Outes said. “You can’t find repair shops.”

Levy thinks that part of the problem is deliberately cheap and defective products. 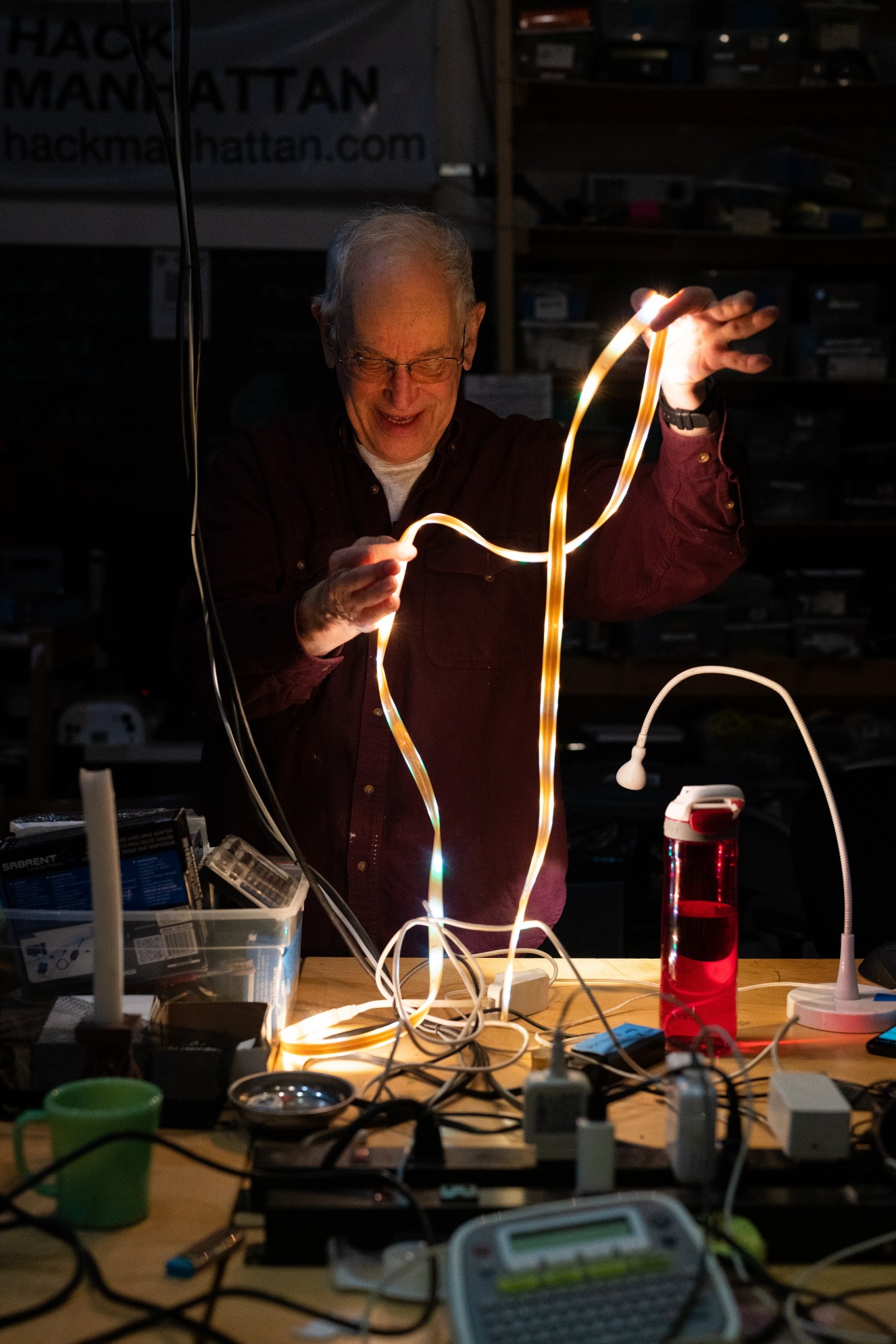 “They embed fuses that fail after a year or two and then, like, your toaster, whatever, your microwave, your hair dryer ends up on the curb in Manhattan,” said Levy.

According to Department of Sanitation data, New Yorkers throw out 3.6 million tons of trash each year. That’s more than 2 pounds of trash per person each day—approximately the equivalent of a toaster or a lamp, which the Fixers salvage frequently.

But even well-designed products wind up in the trash when the cost to repair them is more than buying a new one. This is often because manufacturers lock their devices with proprietary parts or software that is not available to independent repair shops.

“How do you fight this?” said Levy.

That evening the Fixers repaired: a string of lights, a vest, a computer, a lamp, a DVD player, a drone, a chair, jewelry and two toasters.

What brings people like Lambert and Outes to the group is really the same thing that drives the Fixers themselves: a love for the objects in their lives.

“A lamp is really just a cord, a plug and a socket, but that lamp could have been in the family for several generations,” said Lai. “Sentimentality is what brings people here, to preserve and uphold the value of the things that they love in their house.”