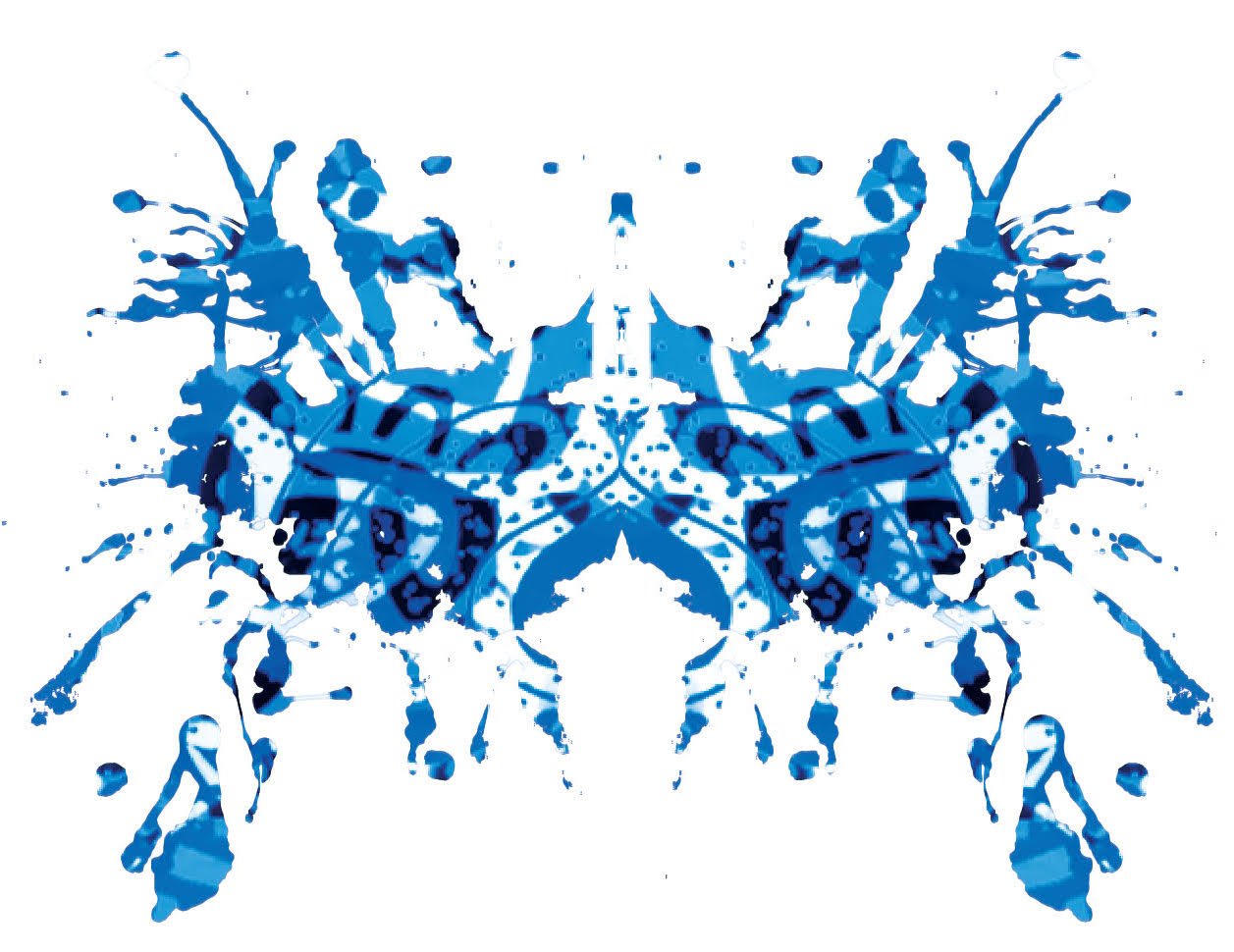 Michelle Hammer, a designer and mental health advocate, reimagines Rorschach ink tests, which have historically been used to diagnose people with severe mental illnesses. Hammer incorporates intricate patterns and bright colors to depict how someone with a mental illness might perceive an ink test. (Artwork courtesy of Michelle Hammer)

Several years ago, Michelle Hammer noticed a homeless man on the subway raising his hands and shaking his head from side to side. Hammer, who lives with schizophrenia, immediately recognized that he was hallucinating. She knew because she had made nearly identical movements during her own periods of psychosis.

“What’s the difference between me and this guy?” Hammer said she thought.

“Family, friends, my doctor. If I didn’t have my support team, I could so easily be homeless,” Hammer said. It’s a story that she frequently recounts as a turning point in her decision to challenge the current narrative about severe mental illness.

Many New Yorkers who experience recurring auditory hallucinations agree that the stigma surrounding mental illness needs to change. The fear of judgment from colleagues, friends and family makes it difficult to be open about hallucinatory experiences, especially in the frightening moments when someone encounters symptoms for the first time.

Yet, opinions on how to best combat this stigma vary widely among the people who suffer from hallucinations as well as the neuroscientists and psychiatrists charged with treating them.

For Hammer, the solution involves transforming her experiences into a tool to spread awareness. She has developed a clothing line, Schizophrenic.NYC, that aims to encourage people to have open conversations about conditions like schizophrenia.

The line features shirts emblazoned with phrases like, “Don’t be paranoid. You look great,” as well as colorful Rorschach ink blots, which have historically been used by psychiatrists to detect schizophrenia and other disorders in patients. Hammer says a portion of revenue goes to organizations that assist people with mental illnesses who are dealing with homelessness.

She also co-hosts a podcast called “A Bipolar, a Schizophrenic, and a Podcast,” which covers the day-to-day experiences of a person living with severe mental illness as well as practical paths to recovery.

When strangers mingle with Hammer at pop-up events, they are often surprised when she explains that she lives with schizophrenia. It’s easy to detect someone who’s going through a mental health crisis but nearly impossible to identify those who have learned to successfully manage their condition, she added.

“There are actually well-adjusted, successful people with schizophrenia living all around us,” Hammer said. “We just don’t associate it that way because we don’t know.”

Hammer said that openly discussing her diagnosis and subsequent treatment has given others opportunities to be more open about their own mental issues, but she acknowledges that care is often inaccessible to those who need it the most.

Others are using alternative methods of treatment to push back against stigma.

Dmitriy Gutkovich, the vice president of a support network called Hearing Voices NYC, facilitates group sessions with New Yorkers who regularly hear voices in order to share coping techniques and provide support. The group believes that voices can provide insights into one’s previous traumas and can even be harnessed to provide positive messages to the person experiencing them.

What further sets Hearing Voices NYC apart from other peer networks is its practice of referring to members’ experiences as voice hearing rather than auditory hallucinations. They believe the term is more inclusive to people whose voices are unaccompanied by any other troubling symptoms or those who feel stymied by the medical definitions that are currently available.

Hearing Voices NYC is part of a growing global movement that began in the Netherlands in the 1980s. It is headed by Marius Romme, a psychiatrist who came to believe that hallucinatory voices can be interpreted and understood as meaningful messages.

Traditional psychologists tend to disregard the content of voices altogether in favor of providing insight to their patients about how hallucinations and delusions arise biologically.

But, Hearing Voices NYC does not make judgments about the origins of voice-hearing experiences; biological and supernatural interpretations are respected equally. Instead, groups focus on sharing practical tactics to either change the content of their voices or quiet them altogether.

Gutkovich has found it helpful to interpret his voices metaphorically. If a particularly harsh voice threatens Gutkovich with fire, he will take it as an opportunity to use the fire from his stove to cook dinner for his wife.

“Voice hearers analyze and develop strategies for our situation pretty much every day, because it’s survival. We have no other method of continuing to live our lives,” Gutkovich said.

He added that learning to work with his voices was the best solution for him, although others might prefer psychiatry centered alternatives. Gutkovich denied requests to facilitate an interview with those who participate in Hearing Voices NYC support groups, citing privacy concerns.

Still, traditional psychologists worry that engaging with auditory hallucinations could potentially have harmful consequences. For people whose hallucinations are accompanied by delusions and paranoia, as is common in those diagnosed with schizophrenia, giving legitimacy to a person’s voices can lead to even more confusion.

The stigma that surrounds auditory hallucinations is complicated, partly due to the wide spectrum of experiences that fall under the category. The Schizophrenia and Related Disorders Alliance of America estimates that around 1% of the world’s population lives with schizophrenia.

But researchers are also examining the more common rate of people who experience hallucinations at some point in their lives yet never go on to develop a psychotic illness. A recent study published in JAMA Psychiatry, a prominent medical journal, found that this was the case in around 5% of the world’s population, although other estimates are much higher.

Dr. Robert Laitman, who takes care of over 120 people with psychotic symptoms in the Bronx, said its reasonable for some patients to initially be skeptical of psychiatry, even though it is often a key part of recovery. Laitman acknowledges that part of the stigma surrounding mental health issues lies within the medical community itself.

He previously worked as a nephrologist and geriatric doctor but shifted his focus after his son was diagnosed with schizophrenia as a teenager. Even for the Laitman family, who had connections with doctors across the city, it was difficult to find comprehensive care.

“It’s incredible that an entire profession is willing to throw away people’s lives when they’re 15 years old..16 years old and tell families that now is time to change your expectations,” Laitman said. “We were totally dumbfounded.”

Laitman takes a different approach than some of his colleagues. Besides prescribing medication, he builds deep relationships with his clients and their families and even hosts running and swimming groups at his house to encourage his patients to stay active.

“A lot of these kids just want to get back into their lives,” Laitman said. “They want people to accept that they have strengths as opposed to always talking about weaknesses.”

In a recent statement to the American Psychological Association, Laitman listed 10 steps that he believes are integral to changing the way the United States thinks about psychotic illnesses. Among his complex analysis of the latest studies, he concluded with a final plea to psychiatrists, in all-caps for added emphasis: “Always be kind!”