A Wave of Senior Swimmers Find Healing Under Water 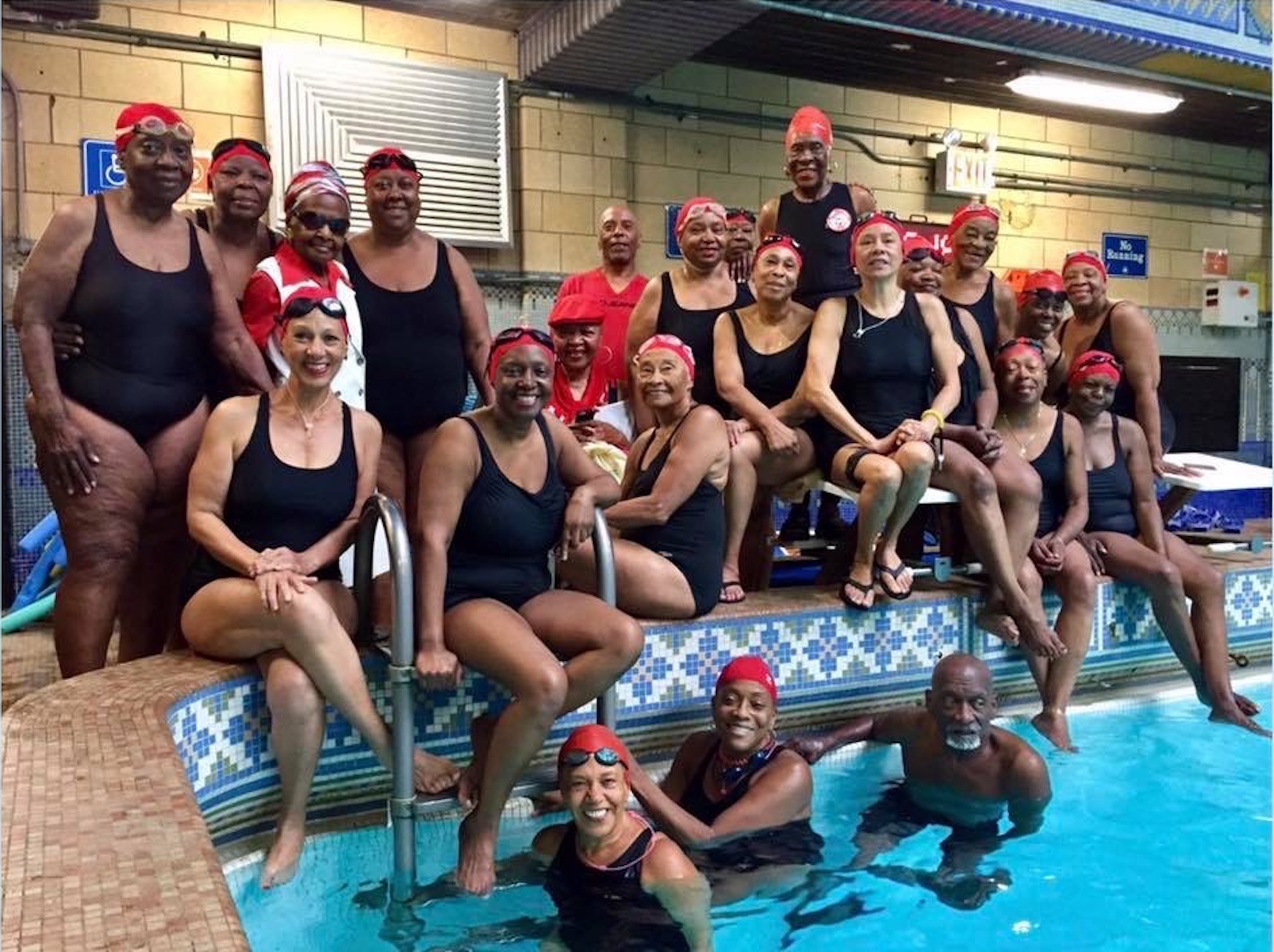 The oldest member of the Harlem Honeys and Bears is 97; the youngest is 63.  (Aaron Mitchell/NYCity News Service)

On any given Monday, Wednesday or Friday morning, the Harlem Honeys and Bears, a synchronized swim team of older adults, put on their swim caps and suits and lower themselves into the water.

Hale has been a member of the team for about 10 years. She joined when she was in her late 50s, as soon as she qualified for the senior membership discount. She also teaches young adults and children from the community how to swim.

The team, formed around 1979, has made waves for their stunning performances and success in competitions. The oldest member is 97, the youngest is 63.

Multiple members have competed and won in yearly city and state competitions. Some have competed in the Senior Olympics. They also perform during opening day at local outdoor pools.

“It gets hard sometimes to get up and go to practice. But once you’re there you don’t ever want to go home,” said Aaron Mitchell Sr. “The water makes you feel wonderful.”

Practices usually are held three days a week, and some team members swim even more than that. Luther Gales has competed in the National Senior Games and is training for a place in the top three spots at the upcoming 2021 national competition in Fort Lauderdale, Florida.

“It’s older people like myself, enjoying life and good camaraderie after the games…You might beat somebody and become a friend for life. It’s just a good thing,” said Gales.

Gales is also an experienced runner and cyclist.

“The buoyancy of the water allows you to do things that you cannot do on land: flips, rolling around, doing a backflip, even diving off the deck into the water. You get into the zone,” said Gales.

“I made sure my kids all knew how to swim. And while they were learning how to swim, I was sitting back watching them,” said Jean Miller, a member of the team. After retiring, she wanted to find something to keep her busy—and healthy.

“I had all of this athletic ability in me, and I had never known it,” said Miller. In 13 years, she has brought home 48 medals from swimming and track and field competitions combined. Miller learned how to swim when she found the Honeys and Bears.

Normally, the team practices at the Hansborough Recreation Center. However, the pool is temporarily closed as part of a renovation project.

“We expect to have a report in early 2020 recommending whether the pool can be temporarily reopened before it is reconstructed,” said a city Parks and Recreation Department spokesperson.

In the meantime, most of the team has been swimming at the recreation center on 54th Street. Multiple team members are eager to get back to their home pool. They feel the water at the 54th Street pool is colder.

“I’m anxious to get back in the pool,” said Rasheedah Ali-Seck, a member since 1989. The 54th Street pool isn’t very accessible for Ali-Seck for a few reasons, including the distance from her home.

Ali-Seck joined the team after a doctor advised her to take up a sport that would increase her lung capacity. She had severe asthma and had been in the intensive care unit six times. Holding her breath underwater and doing aerobic exercise has strengthened her lungs.

“It’s important for people to know that no matter your age or activity level, there’s a place for you in the water,” said Ali-Seck.

Oliver Footé, their coach, choreographs routines that everyone can do, “no matter their physical needs and abilities,” said Miller. A handful of members who use rollators, walkers or wheelchairs also utilize a pool lift to get in the water.

Some stick to the shallow water, while others swim deeper and practice diving. Routines are choreographed, consistently practiced and synchronized.

Swimming brings relief for all types of aches and pains. Hale was experiencing heart issues when she joined the team and said that those issues stopped once she began swimming.

“I feel like swimming is what’s keeping me healthy,” she said.

Water movement is proven to be therapeutic and studies show it helps reduce falls. Aqua aerobic therapy was found to increase joint stability, balance, cardiovascular endurance and muscle strength in a study in the Journal of Physical Therapy Science.

The health benefits of swimming certainly appeal to the team members but most return to the pool for the love of the sport.

“We have a pool, but imagine if you had the whole ocean. I’d like to be a fish in my next life” said Hale. “I mean, I might have been one in my past life, I don’t know!”